Staffline employees battle the terrain for charity in The Brecon Beacons! 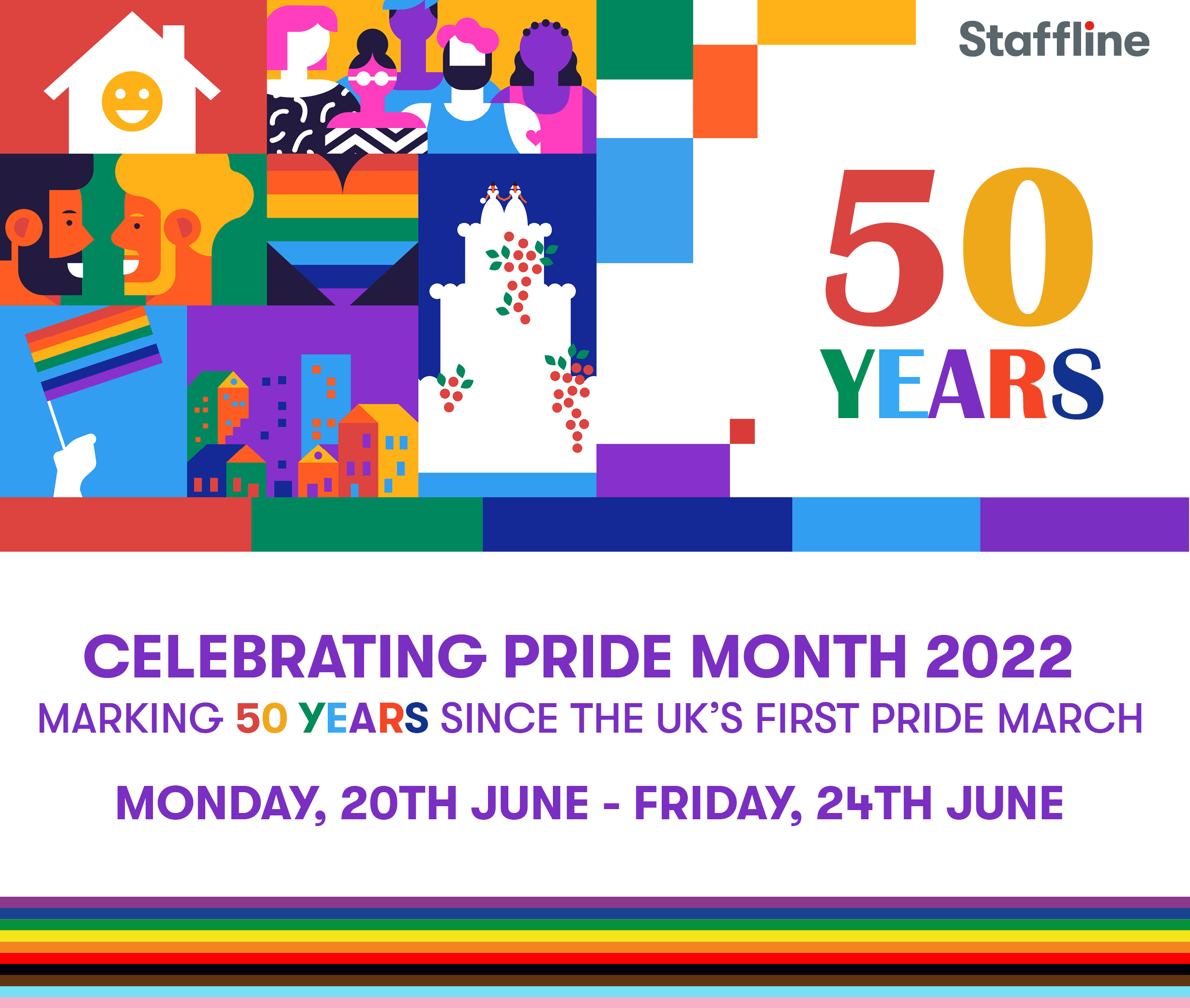 Pride Month takes place during June every year and is dedicated to celebrating LGBTQ+ communities across the world. This year is particularly special, as it marks the 50 year milestone of Pride in the UK.

In 1972, over 2,000 people gathered at Trafalgar Square in London for the first-ever Pride march in the UK. Presently, more than 1 million people celebrate Pride in London alone and events now take place all over the world in celebration of the LGBTQ+ community.

At Staffline, we are proud supporters of the LGBTQ+ community and to celebrate Pride Month 2022, we hosted an internal week-long event to mark the occasion!

This year, we focused our efforts around sharing the history of Pride with our colleagues and, whilst there’s still more to do, how far the LGBTQ+ community has come. We shared articles, videos and eLearning content marking key milestones throughout the decades, starting with the 1970’s and finishing with the 2010’s & beyond!

Here is a recap of some of the history we shared:

In 1972, the Gay Liberation Front organised the UK’s first Gay Pride march in London from Trafalgar Square to Hyde Park, with around 2,000 protesters. This memorable event was a huge turning-point and marked the beginning of Pride as we know it, in the UK. 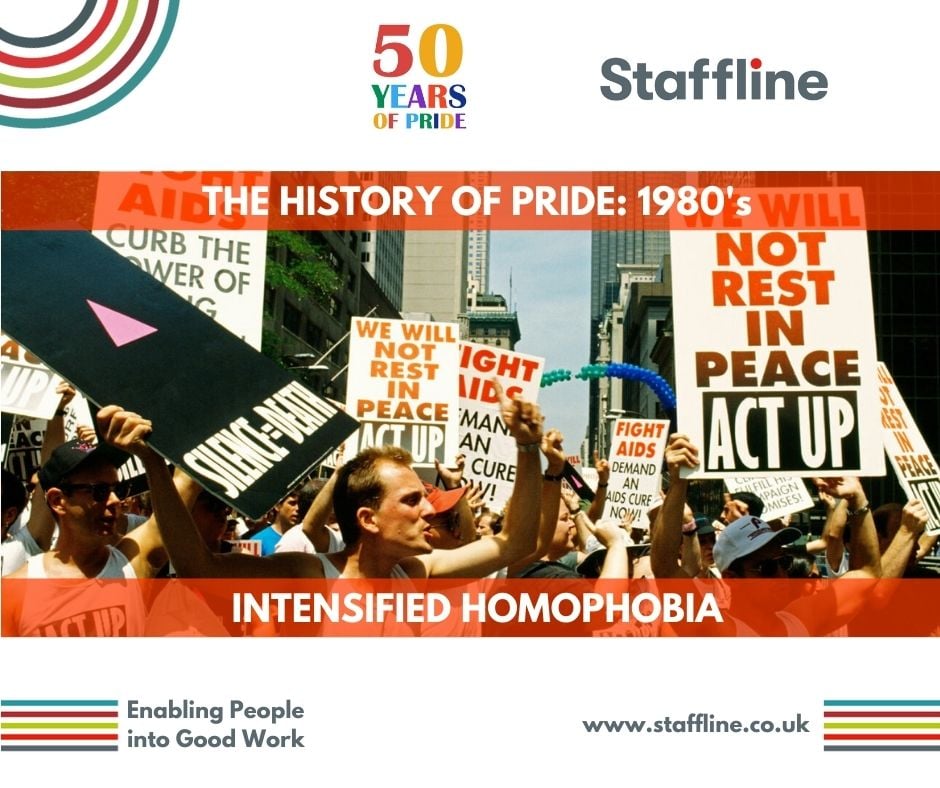 The 1980’s was a poignant era in LGBTQ+ history and a period of intensified homophobia. In 1981, the first case of AIDS was recorded in the UK, killing thousands of people and sparked fear, confusion and prejudice.

Coined by the media as ‘The Gay Plague’, this unfair judgement was a major contributing factor to the demonisation of the gay community during the 1980’s.

Later, in 1988, the UK government made an amendment to a local government act know as ‘Sector 28’, which was brought in to “prohibit the promotion of homosexuality” for local authorities and was only completely repealed in the 2000’s. 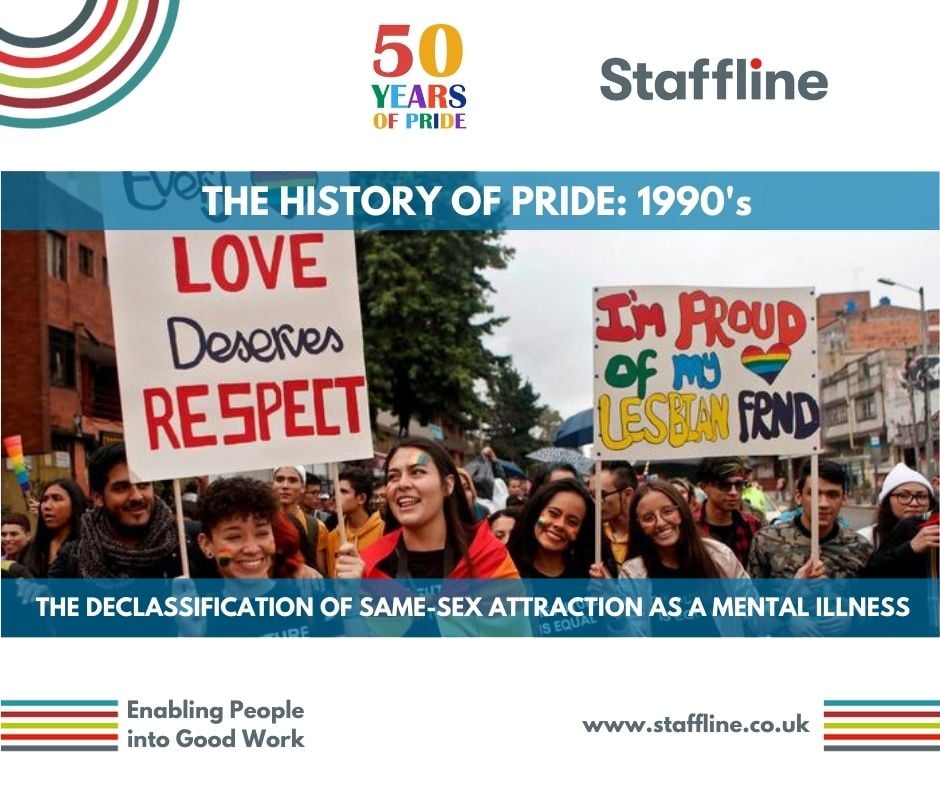 Following a tough decade, entering the 1990’s still meant facing discrimination and inequality if you were part of the LGBTQ+ community. However, several significant milestones enabled a step in the right direction.

In 1992, the World Health Organization (WHO) declassified same-sex attraction as a mental illness.

The 2000’s marked a major turning point for the LGBTQ+ community, with a number of advancements being made on many legalities in the UK.

- In 2000, the LGBT military ban was lifted
- In 2001, the age of consent was equalised for gay and bisexual men
- In 2003, ‘Section 28’ was abolished
- In 2005, the Gender Recognition Act gives rights to trans people & the introduction of the Civil Partnerships Act
- In 2007, The Equality Act (sexual orientation) Regulations were introduced, making it unlawful to discriminate on the grounds of sexual orientation in the provision of goods, facilities, services, education and public functions. 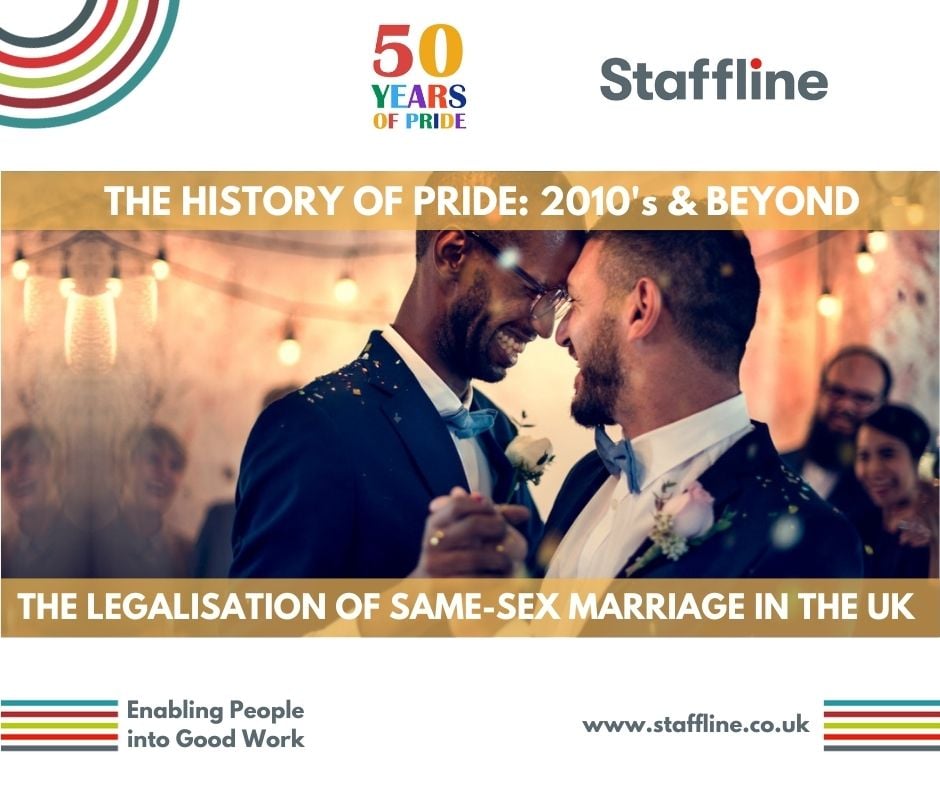 The Equality Act 2010 brought together various laws into one single act in which people are protected against discrimination, harassment or victimisation. For the LGBTQ+ community, this included gender reassignment and sexual orientation as protected characteristics.

More recently, in 2019, the World Health Organization (WHO) declassified being transgender as a mental disorder.

However, It’s clear that there’s still more that could be done. For example, following the Queens Speech in May, the UK government announced plans to ban “abhorrent” practices intended to change people’s sexual orientation. Although, the plans do not cover attempts to change someone’s gender identity.

One of our core focuses at Staffline is to ensure that our LGBTQ+ colleagues are supported in every way possible. In addition to our Equal Opportunities Policy, today we launched our brand-new Gender Identity Guidance document, designed to offer support and advice on;

In addition, we are also making changes to our internal HR systems to ensure that our colleagues are able to record their gender in their own words (using free text boxes, as opposed to tick boxes).

What did you do for Pride Month 2022? Let us know and @ us on our social media accounts:

An Overview of Staffline

Founded in 1986, Staffline is the UK’s leading provider of flexible blue-collar workers, supplying approximately 50,000 staff per day on average to around 450 client sites, across a wide range of industries including agriculture, supermarkets, drinks, driving, food processing, logistics and manufacturing.

Find out more at: https://www.staffline.co.uk/

ADHD: What Is It and How Do We Accommodate It?